The Roman See, Permanent and Unwavering Champion of the Indissolubility of Marriage and of the Integrity of the Blessed Sacrament: 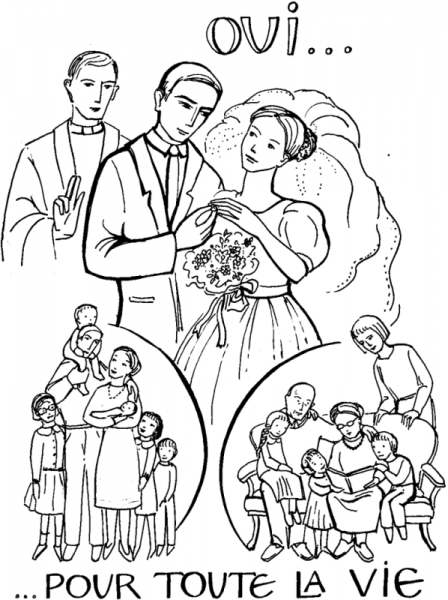 “There is nothing new under the sun,” least of all the continued crusade the church has headed and now heads against the enemies of Christian marriage. What marriage is, what duties it involves, what holiness it requires, what grace it confers, we leave to other pens more learned or more eloquent to define. What are the Scripture authorities and allowable inferences concerning the married state, its indissolubility and its future transformation in heaven, we leave to theologians to state.
...

But as witnesses are multiplied when a strong case has to be made out in favor of some important issue, let us turn to the tribunal of history, and look over the record of the church’s battles. Witnesses without number rise in silent power to show on which side the weight of church influence has ever been thrown—the side of the oppressed and weakly. Every liberty, from ecclesiastical immunities to constitutional rights, she has upheld and enforced, and it would be impossible that she, the knight-errant of the moral world, should have failed to break a lance, through every succeeding century, for the integrity of the marriage bond.
...

Lothair [Lothair II], King of Lorraine [Lotharingia], ... was anxious to get rid of his wife Thietberga [Teutberga]. This was one of the most famous cases of the sort during the Middle Ages, and was prolonged over many years, breeding not only the utmost moral disorder, but threatening also to bring about even political convulsions.

Lothair had conceived a criminal passion for one of his wife’s maids, Waldrade, and to marry her his first endeavor was to prove the queen guilty of incest before her marriage with him. For this purpose he summoned his bishops three times at Aix-la-Chapelle [Aachen], in 860, and had Thietberga condemned to the public penance usually inflicted in those days on a fallen woman. The time-serving prelates, after a superficial examination of the evidence, allowed the divorce on the plea that “it is better to marry than to burn”; thus giving an early historical proof of the old saying about a certain person “quoting Scripture.” 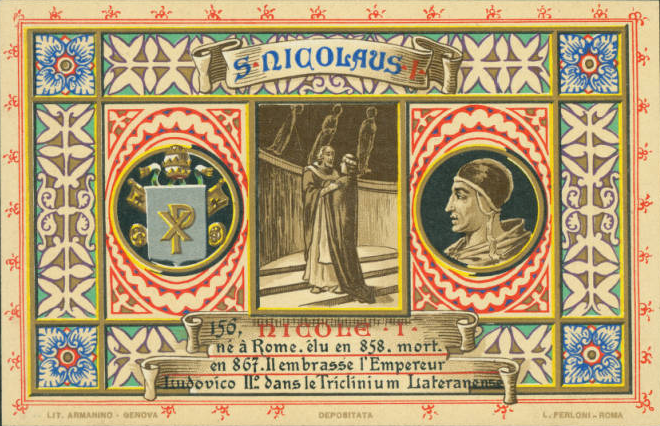 Widalon, Bishop of Vienne, who had not concurred in this iniquitous decree, wrote to the pope for guidance.The pope, Nicholas I, firmly standing by the tradition of the church, and vindicating the fundamental dogma of the sanctity of marriage, replied uncompromisingly that the divorce was null and void, the bishops blamable for their servility, and that even were it proved beyond doubt that Thietberga had been guilty of incest or any other sinful intercourse before marriage, yet the marriage itself could never on that account be legally dissolved.

The queen herself then appealed to the pope, who appointed two legates to inquire into the matter. Baffled in his first attempt, Lothair now trumped up a second pretext, and pretended that he had been previously married to Waldrade, and that the queen had therefore never been his lawful wife. The pope replied that, until this matter was disposed of, the queen should be sent with all honor to her father, and suitably provided for from the royal treasury. Thietberga was now arraigned before a packed and bribed tribunal, and forced to acknowledge herself an interloper, but found secret means of sending word to the pope that she had acted under compulsion. Nicholas then wrote an indignant letter to the king and bishops, annulled all previous decisions, and commanded a new and fair trial of the case to be held He then wrote to the Emperor of Germany, Louis II, and the King of France, Charles the Bald, as well as to all the bishops of the four kingdoms, Lorraine, France, Germany, and Provence, whom he ordered to repair to a council at Metz, where his legates would meet them. He charged them to have more regard to the laws of God than the will of men, and to protect the weak and innocent with all the dignity of their influence. Lothair, however, succeeded in corrupting the legates themselves, and the council merely met to confirm the previous infamous decrees and condemnations. Two of the prelates were chosen to report to the pope and bear hypocritical and falsified messages to him, but in vain.

Nicholas, secretly advised of this treachery, and no doubt also divinely inspired, detected the imposition, abrogated the decrees of the false council, and canonically deposed the two guilty prelates from all their functions and dignities. They immediately took refuge at Benevento with the Emperor Louis II, who, hotly espousing their cause, marched with his army against Rome, and surprised the clergy and people in the act of singing the litanies and taking part in a penitential procession at S. Peter’s. His soldiers dispersed the people by force of arms, and blockaded the pope in his palace. Nicholas escaped in disguise, and for two days lay concealed in a boat on the Tiber, with neither covering for the night nor scarcely food enough to sustain nature.

Thus the conflict between a sovereign’s unbridled passions and the calm and immutable principles of the Gospel was carried so far as to entail actual persecution on the sacred and representative person of the pontiff.

The emperor, repenting of his hasty attack, sent his wife to the pope to negotiate a reconciliation. ... Lothair and the rebellious bishops now quarrelled among themselves, and one of the deposed prelates, the Archbishop of Cologne, repaired in haste to Rome to reveal the duplicity, the plotting, and insincerity that had characterized the whole of the proceedings. The iking himself, however, showed a disposition to submit, most of the bishops begged the pope’s forgiveness, and the former legate, Rodoaldus, having been excommunicated for his collusion with the king, a new one, Arsenius, Bishop of Orta, was appointed. The conditions he was charged to demand were explicit — either Waldrade must be dismissed, or the excommunication until now delayed in mercy would be pronounced. Unwilling to submit entirely, yet dreading the consequences if he did not, Lothair actually recalled Thietberga to her lawful position, and allowed Waldrade to accompany the legate to Rome, as a public token of her repentance and obedience. But although his royal word was plighted, he soon found his blind appetites too much for his reason and his faith, and, sending messengers to bring back his mistress, relapsed into his former sins. Waldrade herself was now publicly excommunicated.

In the meantime, Pope Nicholas died, and was succeeded by Adrian II, who proved himself no less strenuous an opponent of royal license than his holy predecessor had been. Lothair, naturally inclined to temporize, offered to go to Rome and plead his own cause with the new pontiff. In a preliminary interview held at Monte Casino, the pope reiterated his firm intention of coming to no understanding before the king had made his peace with Thietberga and finally dissolved his criminal union with Waldrade.

The next day was Sunday, and the king hoped to hear Mass before he left for Rome, but he could find no priest willing to celebrate it for him, and was forced to take his departure in diminished state for Rome, where no public reception awaited him, so that he had to enter the Holy City almost as a pilgrim and a penitent. In those days of princely hospitality and profuse pageantry, such an occurrence was rare, and, therefore, all the more significant of the majestic and practical power of the church. 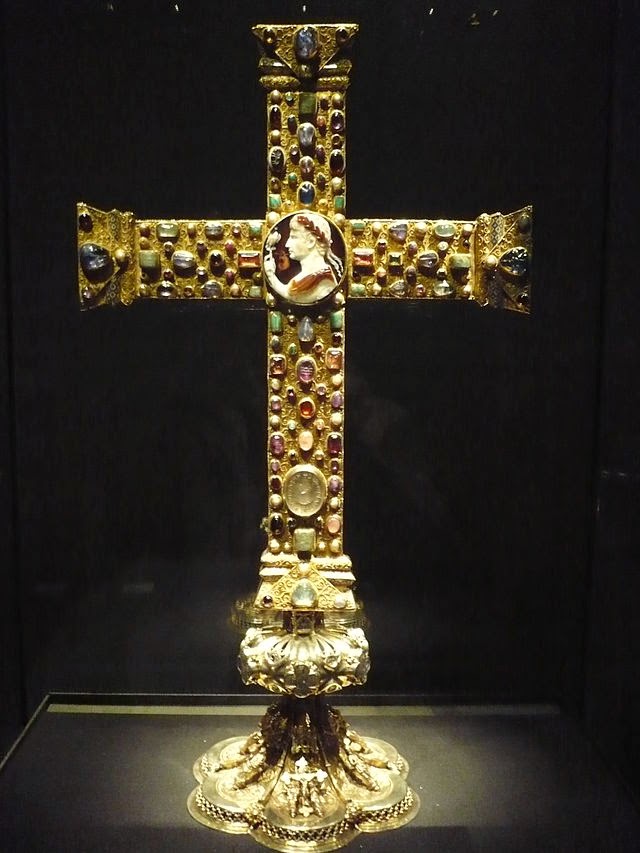 The famous Lothair Cross, in the Aachen Cathedral treasury, is named after King Lothair II of Lorraine, though mostly crafted at a later date

Lothair, now thoroughly sensible of his sin, and warned by the terrible dissensions of the past of what further misery to his country and people his prolonged obstinacy might involve, signified his intention to submit unconditionally to the pope’s decree. High Mass was then celebrated in his presence and that of all his noble followers by the pope in person, and when at the moment of communion the king approached the altar, Adrian impressively addressed to him the following unexpected adjuration:

“I charge thee, O King of Lorraine, if thou hast any concealed intention of renewing thy shameless intercourse with thy concubine Waldrade, not to dare approach this altar and sacrilegiously receive thy Lord in this tremendous sacrament; but if with true repentance and sincere purpose of amendment thou dost approach, then receive him without fear.”

The king, evidently moved by this solemn address, knelt down and communicated, and his retainers and courtiers took their places at the sacred board. That no pretext might remain for further equivocation, the holy pontiff warned them also, before administering the Blessed Sacrament to them, saying:

“If any among you have wilfully aided and abetted the king, and are ready wilfully to aid and abet him again in his wicked intercourse with Waldrade, let him not presume to receive sacrilegiously the body of the Lord; but you that have not abetted him, or that have sincerely repented of having done so, and are resolved to do so no more, approach and receive without fear.”

A few of them shrank back at these awful words, but the greater part, whether in sincerity or in contempt, followed the king’s example and received.

After this, which did not take place till 869, we hear no more of Lothair’s passion for Waldrade. [Lothair died soon afterwards, in Piacenza, in his way back from Rome to Aachen.]