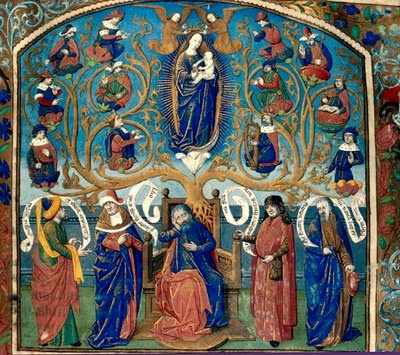 Hæc dicit Dominus Deus: Egredietur virga de radice Iesse, et flos de radice eius ascendet. (From the Lesson for Ember Friday in Advent, Isaias xi,1: “Thus saith the Lord God: There shall come forth a rod out of the root of Jesse, and a flower shall rise up out of his root.”)

[T]he Messianic idea assumed in Isaias a clearness and an abundance of expression which it is impossible to render to you, since I should weary you by the number and length of the passages I should have to cite.
It is he who sees the Messiah springing from the race of Jesse, the father of David, and who at the same time describes, as if from Calvary or the , the glory of the sufferings and triumphs of Jesus Christ. “Arise, arise, put on thy strength, O Sion; put on the garments of thy glory, O Jerusalem, the city of the Holy One: for henceforth the uncircumcised and unclean shall no more pass through thee”; “How beautiful upon the mountains are the feet of him that bringeth good tidings, and that preacheth peace: of him that showeth forth good, that preacheth salvation, that saith to Sion: Thy God shall reign”. “The Lord hath prepared His holy arm in the sight of all the Gentiles, and all the ends of the earth shall see the salvation of our God.” “Behold my servant shall understand, he shall be exalted and extolled, and he shall be exceeding high. As many have been astonished at thee so shall his visage be inglorious among men, and his form among the sons of men. He shall sprinkle many nations. Kings shall shut their mouth at him: for they to whom it was not told of him have seen, and they that heard not have beheld.”
And immediately afterwards, Isaiah begins the description of the sufferings and ignominies of , which he completes in twelve consecutive verses. Then he continues, resuming his hymns of triumph: “He that hath made thee shall rule over thee, the Lord of hosts is his name; and thy Redeemer, the Holy One of Israel, shall be called the God of all the earth”.
But it is at , during the captivity, six hundred years before Jesus Christ, that the Messianic idea becomes invested with a form which attains to mathematical clearness and precision. Must I recall to you the prophecy of Daniel? Listen then to it: “Seventy weeks are shortened upon thy people, and upon the holy city, that transgression may be finished, and sin may have an end, and everlasting justice may be brought, and vision and prophecy may be fulfilled, and the Saint of saints be anointed. Know thou therefore and take notice that from the going forth of the word to build up Jerusalem again unto Christ the Prince, there shall be seven weeks and sixty-two weeks: and the street shall be built again, and the walls in the straitness of times. And after sixty-two weeks Christ shall be slain: and the people that shall deny him shall not be his. And a people with their leader that shall come shall destroy the city and the sanctuary: and the end thereof shall be waste, and after the end of the war the appointed desolation. And he shall confirm the covenant with many, in one week : and in the half of the week the victim and the sacrifice shall fail: and there shall be in the temple the abomination of desolation: and the desolation shall continue even to the consummation, and to the end.”
I do not stop, gentlemen, to examine the striking features of this discourse, which resembles less a vision of the future than a narration of the past. The course of my subject bears me on and brings me to the foot of the second temple, to hear, five hundred years before Jesus Christ, those last words of the prophet Aggeus: “Yet one little while, and I will move the heaven, and the earth, and the sea, and the dry land, and I will move all nations; and the Desired of all nations shall come; and I will fill this house with glory, saith the Lord of Hosts. ...Great shall be the glory of this last house more than of the first, and in this place will I give peace.”
What continuity, gentlemen, through so many eventful centuries! What fidelity to one and the same idea from so many men separated by ages !
...
It is then certain, gentlemen, that the Messianic idea was the life of the Jewish people during the course of the two thousand years which preceded Jesus Christ; and that idea was held among all the nations of the earth with such unanimity, that it is not even possible to account for it by the communications of the Hebrews with the Gentiles, but it is necessary to suppose a diffusion of that idea even anterior to Abraham. And that Messianic idea, so extraordinary in its universality, its progress, its perseverance, and its precision, is it at length fulfilled?
Yes, it is fulfilled; the one God, creator of the Hebrew Bible, has become the God of nearly all the earth; and the very nations that have not yet accepted Him render homage to Him by a certain number of adorers whom Providence elects from their midst. And who has accomplished this incredible revolution? One single Man, Christ. And whence came this Man, Christ? He was a Jew, of the tribe of , of the house of David. And how has He accomplished this prodigious social and religious revolution? By suffering and dying, as David, Isaias, Daniel had foretold.