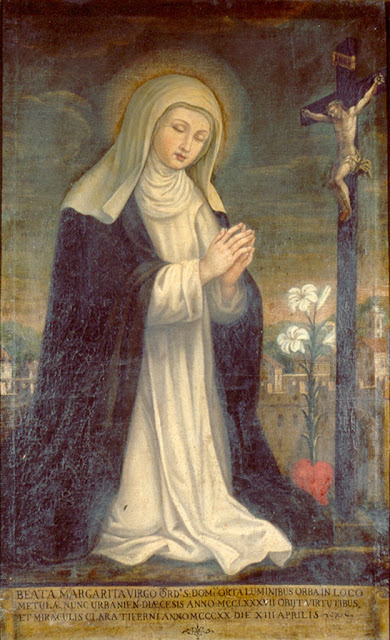 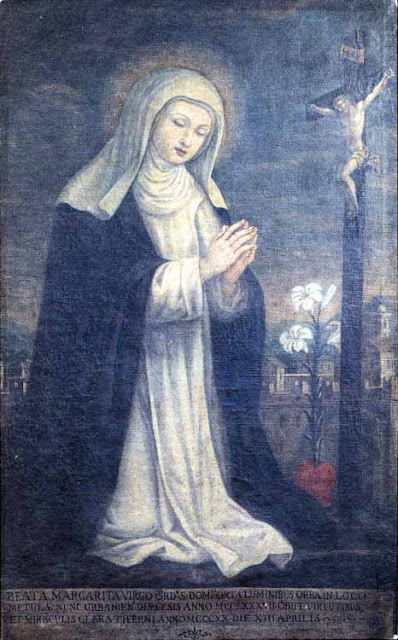 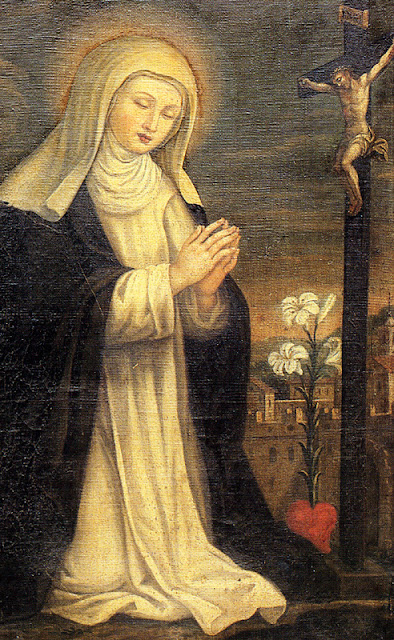 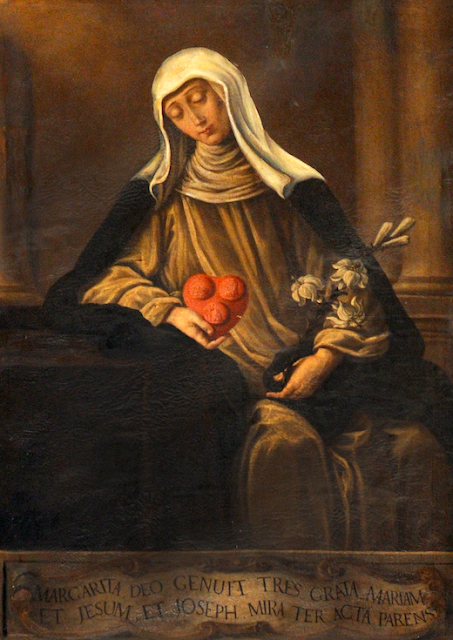 How Do We Paint Disfigurement and Bodily Imperfections in Saints?

Blessed Margaret of Castello is the patron saint of unwanted and disabled children. Born in 14th century Italy, she was disfigured and neglected from birth by her wealthy parents. She was taken in by Dominican nuns when she was sixteen and became a member of their Third Order. Her story is both harrowing and inspiring: harrowing because of the suffering and cruelty she experienced; and inspiring because of her joy in life, which arose from her faith and transcended that suffering. Here is an account of her life from the website of the Dominican sisters at Nashville. As I read this story, it occurred to me that if she had been conceived in our era, and her parents had had access to a sonogram before her birth, she would might very well have become another abortion statistic.
A friend of mine, Gina Switzer, told me that she had been commissioned to paint and image of her, and we were discussing how artists might represent human disfigurement in Saints so that they retain the dignity of the human person. So this week, I thought I’d write about this. (We’ll come back to the series of architecture videos next week.)
The first point is that it is not immediately clear that human imperfections should be portrayed in holy images. One might assume that these are absent in heaven, and so, to the degree that we show the redeemed person, one might argue that they should not be there at all. I was reminded that Denis McNamara told me recently that when they were designing the stained glass windows for the new John Paul II chapel at Mundelein, they thought about this and deliberately left out St Maximilian Kolbe’s spectacles for just this reason.
The counter to this is that in order to make an image worthy of veneration, according to the theology of holy images established by St Theodore the Studite in the 9th century, two things need to be present. First, the name should be written on the image; and second, it should portray the essential visual characteristics of the saint. This last criterion refers to those aspects of the saint that together give the person his unique identity. This can include a physical likeness, although a rigid application of physical likeness is not appropriate; a holy image is not a portrait. We are thinking here of those things that characterize the person and his story, for example, St Paul’s baldness, or the tongs holding hot coal for Isaiah. With this in mind, to use the example of the JPII chapel again, Denis told me that for Blessed Teresa of Calcutta they did want to show her deformed feet because it symbolized her charity; this disfigurement arose because she always chose the worst shoes for herself from those donated to the order. We thought that for St Margaret, in this age of the culture of death, the portrayal of her as a joyful person, but with her physical imperfections, would be particularly important.
One idea was to look for inspiration to the dwarfs painted by Velazquez from the court of Philip IV of Spain, who have great dignity and bearing. This idea was rejected, firstly because they can also have a haughtiness about them which would be inappropriate and need to be changed. Secondly, to successfully incorporate all of these considerations into a naturalistic style would be very difficult indeed - it might almost require a Velazquez to do it. Even in naturalistic styles, there should always be a degree of symbolism (or idealism), and this is notoriously difficult for contemporary Catholic artists to get right even for easier subjects. (Below is Velazquez’s portrait of Sebastien de Morro.)

In the light of all these considerations, I thought that I would probably paint an image in a Gothic or iconographic style, in which Bl. Margeret’s natural physical characteristics were shown, retained but nevertheless redeemed in some way. The first thing I always do, as I was taught, is to look first at existing images, and if I can find one that is appropriate, just copy it. The aim to change as little as possible. If there is no perfect image to copy, then I look at other images from which I can use the particular characteristics that appear to be missing from my desired image, and patch them together into a single image. Only if I can find nothing that has already been painted do I attempt something original. I create drawings made from observation of nature and onto those I impose the stylistic form of the tradition that I am working in.
I found this picture of a sculpture of St Margaret. 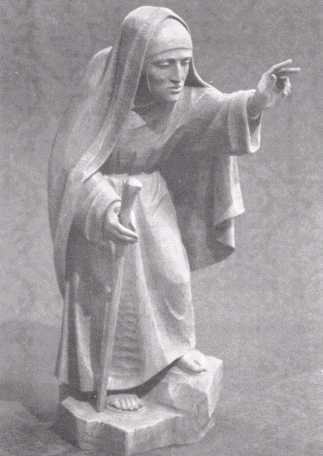 I thought that a painting in egg tempera based upon this would work. One change I would make, however, would be to change make her face more joyful. I like the ones that I see in a series of Aidan Hart’s icons, such as St Winifride, St Hilda of Whitby, or St Melangell, which look to me as though they are based on an ancient icon of St Theodosia at Mt Sinai. You can see images of each below. I would also St Margaret’s her eyes to indicate her blindness. 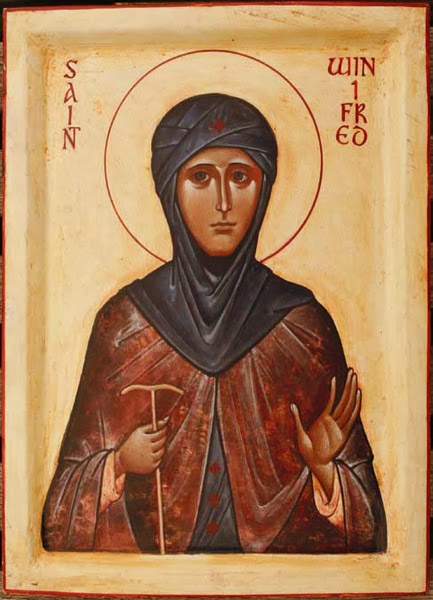 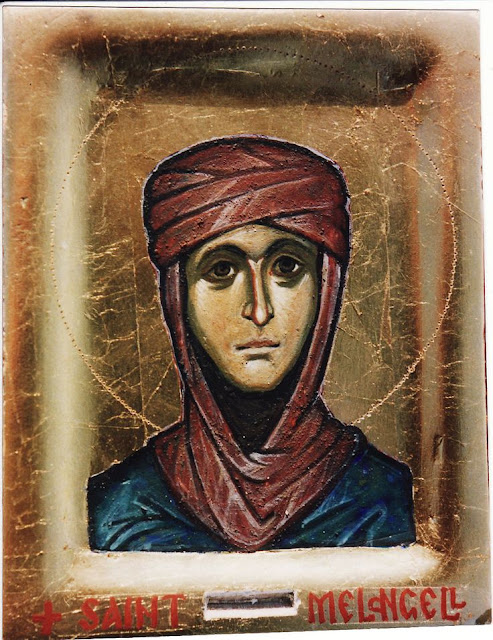 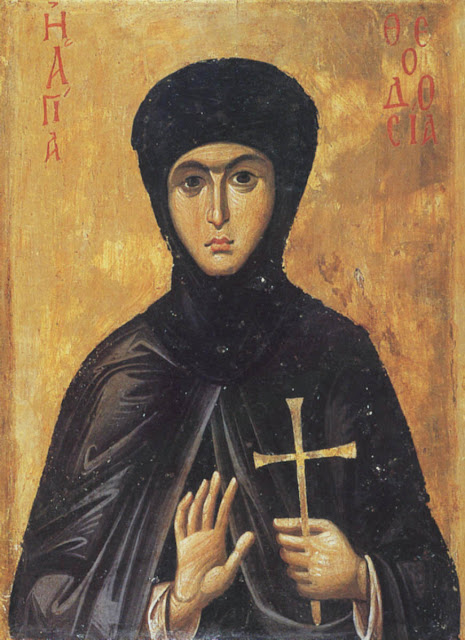