Marriage, it's always been marriage 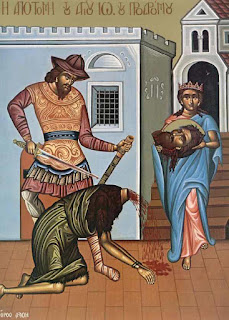 From the very first Martyrdom, that of the "Greatest born of women", Saint John the Baptist, whose Beheading we celebrate today, the purity/indissolubility of marriage has always been the essential moral and social dogmatic centerpiece of Christian life since the fullness of time, when Our Lord Jesus Christ, "by virtue of His supreme legislative power ...restored the primeval law in its integrity by those words which must never be forgotten, 'What God hath joined together let no man put asunder'." (Casti connubii, 34)
Always marriage: always marriage, whose purity the Greeks were at times led to corrupt by Imperial orders. Always marriage -- the rejection of the indissolubility of a single marital bond at the end made that most Catholic Isle, the Dowry of Mary, be led astray by a murderous and lecherous tyrant.
In the Sacrosanct Council of Trent, the Sacrament was completely surrounded with utmost protection. But despite so much attack from the neo-paganized society around us, it is incredibly under attack from the very top of our own Church, and, worse, as always happens with Modernists, they do not wish to disestablish indissolubility itself. No, they want to disestablish it in all but name: if a "remarried" couple is not in need of confession and can approach the most Blessed Sacrament in purity officially (and so an unmarried couple, or a homosexual or polygamous "partnership" of any sort), then what is the purpose of the Sacrament at all, much less of its indissolubility?
As always, these evil hierarchs now at the highest echelons of the Church,

"put their designs for her ruin into operation not from without but from within; hence, the danger is present almost in the very veins and heart of the Church, whose injury is the more certain, the more intimate is their knowledge of her. Moreover they lay the axe not to the branches and shoots, but to the very root, that is, to the faith and its deepest fires. And having struck at this root of immortality, they proceed to disseminate poison through the whole tree, so that there is no part of Catholic truth from which they hold their hand, none that they do not strive to corrupt. Further, none is more skilful, none more astute than they, in the employment of a thousand noxious arts; for they double the parts of rationalist and Catholic, and this so craftily that they easily lead the unwary into error; and since audacity is their chief characteristic, there is no conclusion of any kind from which they shrink or which they do not thrust forward with pertinacity and assurance. To this must be added the fact, which indeed is well calculated to deceive souls, that they lead a life of the greatest activity, of assiduous and ardent application to every branch of learning, and that they possess, as a rule, a reputation for the strictest morality. Finally, and this almost destroys all hope of cure, their very doctrines have given such a bent to their minds, that they disdain all authority and brook no restraint; and relying upon a false conscience, they attempt to ascribe to a love of truth that which is in reality the result of pride and obstinacy." (Pascendi, 3)

May Saint John the Baptist, through his most pure and blessed blood, preserve the Church in this extremely perilous time.
Saint Pius X, pray for us.