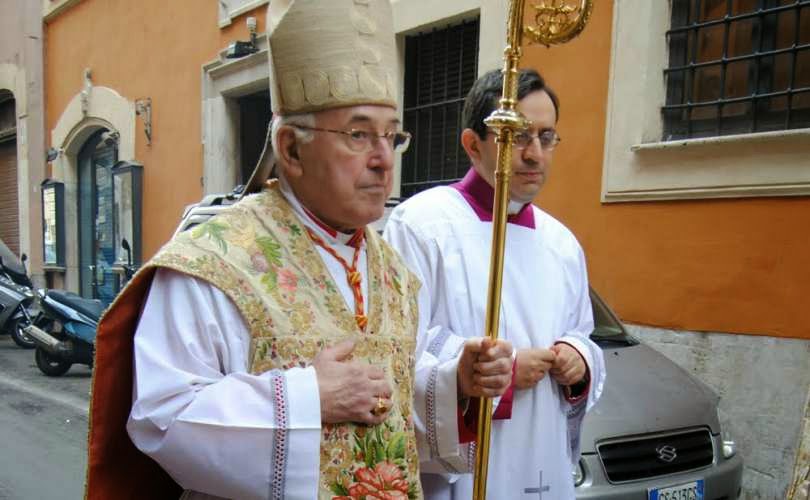 Cardinal Brandmüller: Advocates for changing Catholic teaching on marriage are ‘heretics’ – even if they are bishops

April 14, 2015 (LifeSiteNews.com) - Cardinal Walter Brandmüller has been among the leading voices critical of proposals stemming from the Vatican’s Synod on the Family that risk subverting Catholic teaching on the sacraments and morality. He was one of five cardinals who contributed to the book Remaining in the Truth of Christ, which focused on criticizing Cardinal Walter Kasper’s proposal to open up Communion to those in irregular sexual unions.

LifeSiteNews: Could you present once more for our readers clearly the teaching of the Catholic Church, as it has been consistently taught throughout centuries concerning marriage and its indissolubility?

Cardinal: The answer is to be found in the Catechism of the Catholic Church no. 1638-1642.

Can the Church admit remarried couples to Holy Communion, even though their second marriage is not valid in the eyes of the Church?

That would be possible if the concerned couples would make the decision to live in the future like brother and sister. This solution is especially worth considering when the care for children disallows a separation. The decision for such a path would be a convincing expression of the penance for the previous and protracted act of adultery.

Can the Church deal with the topic of marriage in a pastoral manner that is different from the continual teaching of the Church? Can the Church at all change the teaching itself without falling herself into heresy?

It is evident that the pastoral practice of the Church cannot stand in opposition to the binding doctrine nor simply ignore it. In the same manner, an architect could perhaps build a most beautiful bridge. However, if he does not pay attention to the laws of structural engineering, he risks the collapse of his construction. In the same manner, every pastoral practice has to follow the Word of God if it does not want to fail. A change of the teaching, of the dogma, is unthinkable. Who nevertheless consciously does it, or insistently demands it, is a heretic – even if he wears the Roman Purple.

Is not the whole discussion about the admittance of remarried to the Holy Eucharist also an expression of the fact that many Catholics do not believe any more in the Real Presence and rather think that they receive in Holy Communion anyway only a piece of bread?

Indeed, there is an indissoluble inner contradiction in someone who wants to receive the Body and Blood of Christ and to unite himself with Him, while in the same time he disregards consciously His Commandment. How shall this work? St. Paul says about this matter: ‘Who eats and drinks unworthily, is eating and drinking his judgment...’ But: You are right. By far not all Catholics believe in the Real Presence of Christ in the consecrated host. One can see this fact already in the way many – even priests – pass the tabernacle without genuflection.

Why is there nowadays such a strong attack on the indissolubility of marriage within the Church? A possible answer could be that the spirit of relativism has entered the Church, but there must be more reasons. Could you name some? And are not all these reasons a sign of the crisis of Faith within the Church herself?

Of course, if certain moral standards that have been valid generally, always, and everywhere are not any more recognized, then everybody makes himself his own moral law. That has as a consequence that one does what one pleases. It can be added the individualistic approach to life which regards life as a single chance for self-actualization – and not as a mission of the Creator. It is evident that such attitudes are the expression of a deeply rooted loss of Faith.

In this context, one can state that there was little talk in the last decades about the teaching about the Fallen Human Nature. The dominant impression was that man, all in all, is good. In my view, this has led to a lax attitude toward sin. Now, that we see the result of such a lax attitude – an explosion of inhuman conduct in all possible areas of human life – should this not be a reason for the Church to see that the teaching on the Fallen Human Nature has been confirmed and to therefore proclaim it again?

That is true, indeed. The topic ‘Original Sin’ with its consequences, the necessity for Redemption through the suffering, death and Resurrection of Christ has been largely suppressed and forgotten for a long time. However, one cannot understand the course of the world – and one’s own life – without these truths. It is unavoidable that this ignoring of essential truths leads to moral misconduct. You are right: one should finally preach again about this topic, and with clarity.

The high numbers of abortion especially in the West have done great harm, not only for those killed babies, but also for the women (and men) who decided to kill their child. Should the prelates of the Church not take a strong stance about this terrible truth and try to shake the consciences of those women and men, also for the sake of their salvation? And does not the Church have a duty to defend with insistence the Little Ones who cannot defend themselves because they are not even allowed to live? “Let the Little Ones come to Me....”

Here one can say that the Church, especially under the last popes as well as under the Holy Father Francis did not leave any room for doubt about the despicable character of the killing of unborn children in the womb. This applies no doubt also to all bishops. However, another question is, whether and in which form the teaching of the Church has been witnessed and presented in the public realm. That is where the hierarchy certainly could do more. One only has to think of the participation of cardinals and bishops at pro-life marches.

Which steps would you recommend for the Church to strengthen the call to holiness and to show the path how to attain it?

One certainly has to witness to the Faith in a way that is fitting for the specific situation. In which form this can happen, depends upon the specific circumstances. There opens up a whole field for creative imagination.

What would you say about the recent statements of Bishop Franz-Josef Bode that the Catholic Church has to adapt increasingly to the “life realities” of the people of today and adjust accordingly her moral teaching? I am sure that you as a Church historian have in front of your eyes other examples from the history of the Church, where she was pressured from outside to change the teaching of Christ. Could you name some, and how did the Church in the past respond to such attacks?

It is completely clear and also not new that the proclamation of the teaching of the Church has to be adapted to the concrete life situations of society and of the individual, if the message shall be heard. But this applies only to the way of the proclamation, and not at all to its inviolable content. An adaptation of the moral teaching is not acceptable. ‘Do not conform to the world,’ said the Apostle St. Paul. If Bishop Bode teaches something different, he finds himself in contradiction to the teaching of the Church. Is he conscious of that?

Is the German Catholic Church permitted to go her own paths in the question of the admittance of remarried couples to the Holy Eucharist and thereby decide independently of Rome, as Reinhard Cardinal Marx pronounced after the recent meeting of the German Bishops Conference?

The well-known statements of Cardinal Marx are in contradiction with the dogma of the Church. They are irresponsible in a pastoral respect, because they expose the faithful to confusion and doubts. If he thinks that he can take nationally an independent path, he puts the unity of the Church at risk. It remains: the binding standard for all of the teaching and practice of the Church are her clearly defined doctrines.