A Sermon by Cardinal Burke: On the Marriage of the Virgin Mary with St Joseph

January 23rd is the traditional day of the feast called “The Espousal of the Virgin Mary with St Joseph.” Although never on the general Calendar, it was kept by many religious orders, especially those with a particular devotion to the Virgin Mary, and on many local calendars. On January 10th, His Eminence Raymond Cardinal Burke celebrated a Votive Mass of the Espousal of the Virgin in the Basilica of San Nicola in Carcere in Rome, as part of a recent conference of the Confraternity of Catholic Clergy; this Mass was chosen because marriage and the family, and issues related to them, were the topic of the conference. His Eminence has very kindly allowed New Liturgical Movement to share the full text of his sermon with our readers, for which we offer him our gratitude. (The Scriptural readings of this Mass are Proverbs 8, 22-35, and Matthew 1, 18-21.) 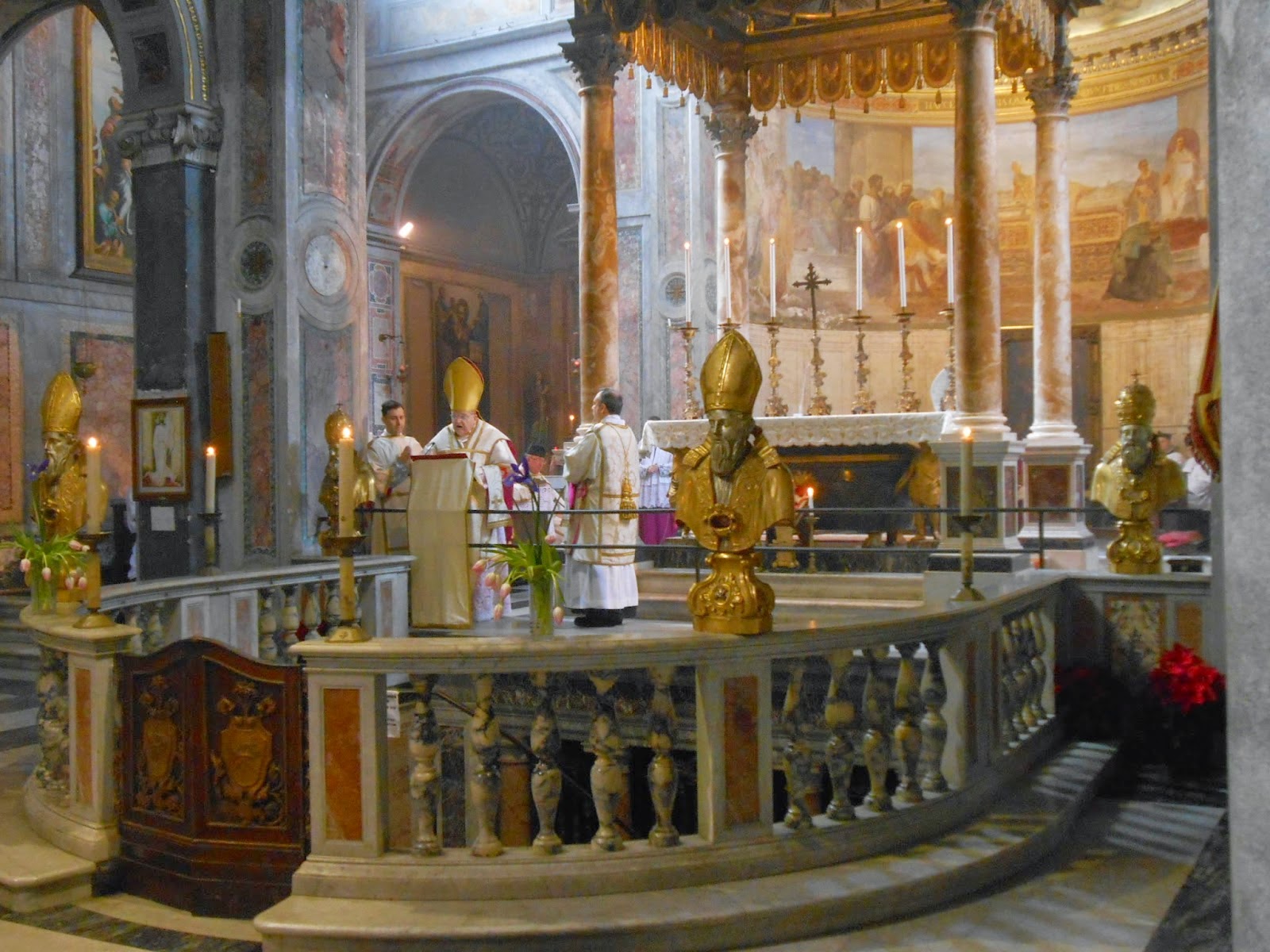 Celebrating the Votive Mass of the Marriage of the Blessed Virgin Mary with Saint Joseph, we contemplate anew the great mystery of God’s immeasurable and unceasing love for us. In the brief account from the Gospel of Saint Matthew, we see how God provided that His only-begotten Son be incarnate in the immaculate womb of the Virgin Mary and at the same time, by His Incarnation, become part of the family of Joseph and Mary. In other words, although Saint Joseph and the Blessed Virgin Mary had married before the virginal conception of God the Son in Mary’s womb, they did so with full respect for the consecration of Mary’s virginity to God from her youth, the offering of her virginity to God for consecration. In other words, Saint Joseph had married Mary with the intention to honor, throughout their marriage, her consecrated virginity.
From the text of the Gospel according to Saint Matthew, it is clear that Mary was already married to Saint Joseph at the time of the Annunciation, but that Saint Joseph had not yet brought her into his home. For that reason, upon learning of her pregnancy, Saint Joseph, for the sake of decency, thought to divorce her in as discreet a manner as possible. To be clear, the word “betrothed” is not rightly understood as “engaged,” but rather as “espoused” or “married,” as the rest of the language of the text makes clear.
Here, it is important to recall the Jewish Rite of Marriage, which the Virgin Mary and Saint Joseph, as devout Jews, were carefully observing. The Rite consisted of two phases: a first phase by which the contract of marriage was sealed, making the parties truly husband and wife, and a second phase by which the marriage was consummated by the bringing of the wife into the home of her husband. In his Apostolic Exhortation Redemptoris Custos, Pope Saint John Paul II, described the observance of the Jewish marriage practice by the Virgin Mary and Saint Joseph with these words:

According to Jewish custom, marriage took place in two stages: first, the legal, or true marriage was celebrated, and then, only after a certain period of time, the husband brought the wife into his house. Thus, before he lived with Mary, Joseph was already her husband.

Mary is indeed the spouse of Saint Joseph and, therefore, the Divine Child conceived in her womb by the overshadowing of the Holy Spirit is a member of the family of Joseph and Mary, and enjoys the divine maternity of the Virgin Mary and the foster-fatherhood or guardianship of Saint Joseph.
Father René Laurentin, making reference to Mary’s decision from her youth “not to belong to any man but to God alone,” thus describes her marital status at the time of the Annunciation:

The Bibles inexactly translate “engaged,” while Mary is really married to Joseph in keeping with the two phases of Hebrew marriage: the consent (qidushin) before the Annunciation, and the second phase, the introduction of the wife into the house of the husband (nissuin), in accord with Joseph’s agreement to a virginal marriage (non-consummated). - (Marie, source directe de l’Évangile de l’Enfance).

Father Laurentin goes on to explain how Mary, by reason of her status of wife in a virginal marriage, believed that she had renounced the possibility of maternity of the Messiah. Accordingly, at the Annunciation, she asked the Archangel Gabriel: “How shall this happen, since I do not know man.” The Archangel then made clear that it is precisely her virginity which prepared her to be the Mother of God. Father Laurentin, referring to her vow of virginity, writes:

But this vow brought about, on the contrary, the only means of achieving this unique privilege. Such are the paradoxes of the Most High. She receives, then, the response which makes new and clarifies everything. (ibid.)

The Church, in fact, has seen in the text about the eternal wisdom of God from the Book of Proverbs an image of the Virgin Mary whom God had chosen, from the beginning, to be the Mother of the Redeemer: “The LORD created me at the beginning of his work, the first of his acts of old.” The inspired text draws us into a deeper reflection on Mary’s Marriage to Joseph and her Divine Maternity in the great Mystery of Faith, the mystery of our eternal salvation. Searching its deepest meaning, we understand the truth of the final verses:

For he who finds me finds life and obtains favor from the LORD; But he who misses me injures himself; all who hate me love death.

Contemplating the Marriage of the Blessed Virgin Mary with Saint Joseph, we see how, at the very beginning of the work of salvation, God the Father took care that the conception of His only-begotten Son in our human flesh be virginal, as it indeed must be, but, at the same time, completely legitimate, so that it manifest fully the truth, beauty and goodness of God. God the Son is virginally conceived in the womb of Mary, Wife of Saint Joseph. The Gospel according to Saint Matthew is marked, in particular, by attention to the juridical nature of our faith and its practice, presenting Christ as the New Moses, the New Lawgiver, most eminently in the Sermon on the Mount. It is inconceivable that God the Son, at His Incarnation, would not respect fully, indeed would not bring to perfection, both the virginity of the Blessed Virgin Mary and the sanctity of her marriage to Saint Joseph.
The accurate understanding of the marital status of Saint Joseph and the Blessed Virgin Mary is important for our fuller knowledge and love of the Mystery of Faith, but it is also important for the avoidance of a confusion and an error which are common today. Reference is made to the serious situation in the revised edition of The Father John A. Hardon, S.J. Basic Catholic Catechism Course. It will be helpful to quote a part of his treatment of the subject:

The fact that Jesus was virginally conceived and born after the marriage of Mary and Joseph means that Jesus was conceived and born within wedlock. This is contrary to what so many, even priests, are saying at the present time, namely, that Jesus was born out of wedlock, like the children of so many unmarried women today, and that this is not an “abnormal” situation. A pregnant, un-wed mother is said to be, according to these people, in the same condition as Mary, who they claim was also un-wed at the time she conceived Jesus. This is false; it is indeed a very serious falsehood, for it undermines the sanctity of marriage and the reason for that sanctity. It is said by defenders of this position that Jesus was conceived after Mary and Joseph were engaged, but not yet married. (The Father John A. Hardon, S.J. Basic Catholic Catechism Course, Manual, Revised Edition, ed. Raymond Leo Cardinal Burke.),

The erroneous position described above is held not only by those who knowingly dissent from the constant teaching of the Church but also by many individuals who are simply poorly catechized and therefore fall prey to such false teaching.
The importance of clarity regarding the marriage of the Blessed Virgin Mary with Saint Joseph is also most important for the discussions regarding marriage undertaken at the present time by the Synod of Bishops. While the Synod of Bishops is called to lift up the beauty of marriage, as God established it from the beginning, there is a strong attempt to introduce discussions about the so-called “positive elements” in the cohabitation of a man and of a woman, like husband and wife, without respect for the Sacrament of Holy Matrimony. We see in the marriage of Mary and Joseph, in a most remarkable way, the beauty of marriage, established by God at the Creation and restored to its original perfection by God the Son Incarnate at the Redemption. Contemplating the marriage of Mary and Joseph, we understand more fully and heartfeltly the words of Christ Himself, when the Pharisees tested him regarding the truth of the indissolubility of marriage:

Have you not read that he who made them from the beginning made them male and female, and said, “For this reason a man shall leave his father and mother and be joined to his wife, and the two shall become one”? What therefore God has joined together, let no man put asunder. (Matthew 19, 4-6)

The teaching of Christ on Holy Matrimony shines forth with particular splendor in the marriage of His Mother Mary and His Foster-Father Joseph.
We are about to witness the great victory of the Cross, the great work of God the Son Who took our human nature in the immaculate womb of the Virgin Mary. Christ now sacramentally offers the Sacrifice of Calvary. He gives us the incomparable fruit of His Sacrifice: His Body, Blood, Soul and Divinity. He gives us the Heavenly Medicine and Food by which we overcome sin in our lives and live in true freedom for love of God and our neighbor. May our contemplation of the Mystery of Faith in the marriage of the Blessed Virgin Mary with Saint Joseph inspire us to teach, to celebrate, and to live the truth about Holy Matrimony, as God established it from the beginning and redeemed it through His saving Passion, Death and Resurrection. May we seek always in the Eucharistic Mystery the grace so to teach, so to celebrate, and so to live. 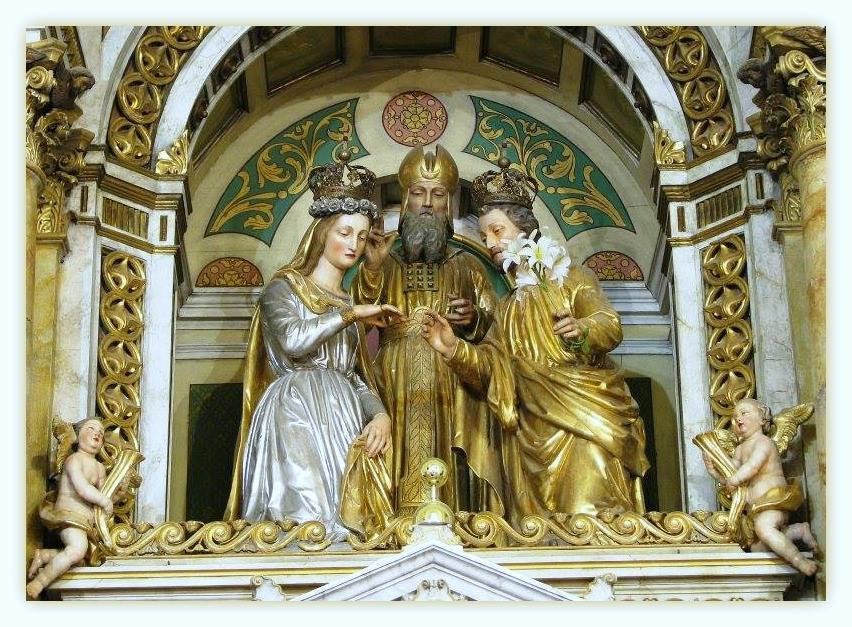